A Nice Cup of Tea?
TASO supported this highly successful community project which celebrated the Windrush Generation and its legacy. Working with the local African – Caribbean Community the aim was to look behind the luxury teacups and sugar bowls in The Ashmolean Collection and to tell a different story about the Colonial History of tea, sugar and transatlantic slavery. An art installation was created from copied images of photographs of the participant families histories which were collaged on to tea sets which were then broken and created into an art work which symbolises the dislocation of families moving to Britain. This is still displayed in the Ceramics Gallery (No 40) at The Ashmolean and accompanied by a video of the personal stories told. 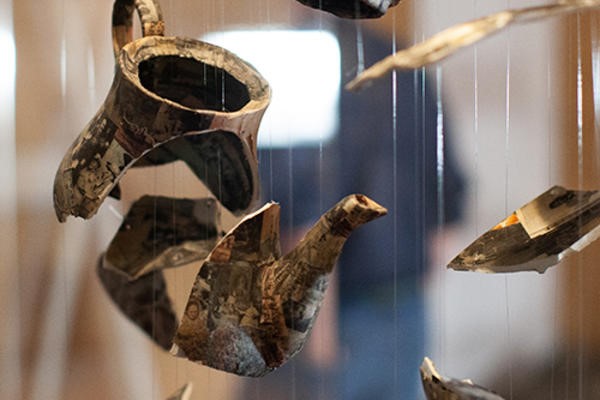 MOMA Oxford Sites of Curiosity
TASO supported Modern Art Oxford’s Young Visiting Artists’ summer workshop 2019 called Sites of Curiosity for children impacted by parental imprisonment. The programme consisted of a range of creative projects and experiences for young people to encourage confidence and participation in art galleries helping them to find their voice, grow in confidence and make new friends. 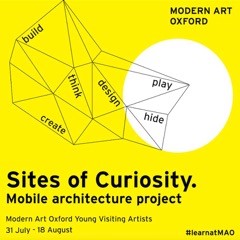 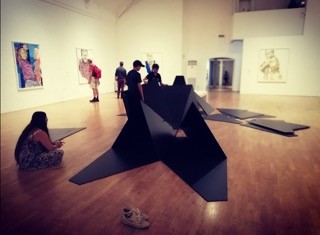 10 young artists aged 6-12 years were provided with opportunities to build resilience, self-esteem and confidence. They learnt to work together, share their ideas and respect those of others. The project gave vulnerable young people, unused to the gallery environment, the opportunity to participate in multiple creative activities. From wearing Modern Art Oxford lanyards and shadowing gallery staff to designing their own tours of the building for members of the public, participants developed a sense of ownership and belonging. Sites of Curiosity was broadcast on Instagram during the project inviting the public to learn more about mobile architecture: https://bit.ly/2ui2rr2

“It was great to see our drawings become real and to see how you scale up a tiny cube to a big idea… I’ve never made anything like this before!”  – Young artist

“I wish I could do this as my job!” – Young artist Luke from East Oxford 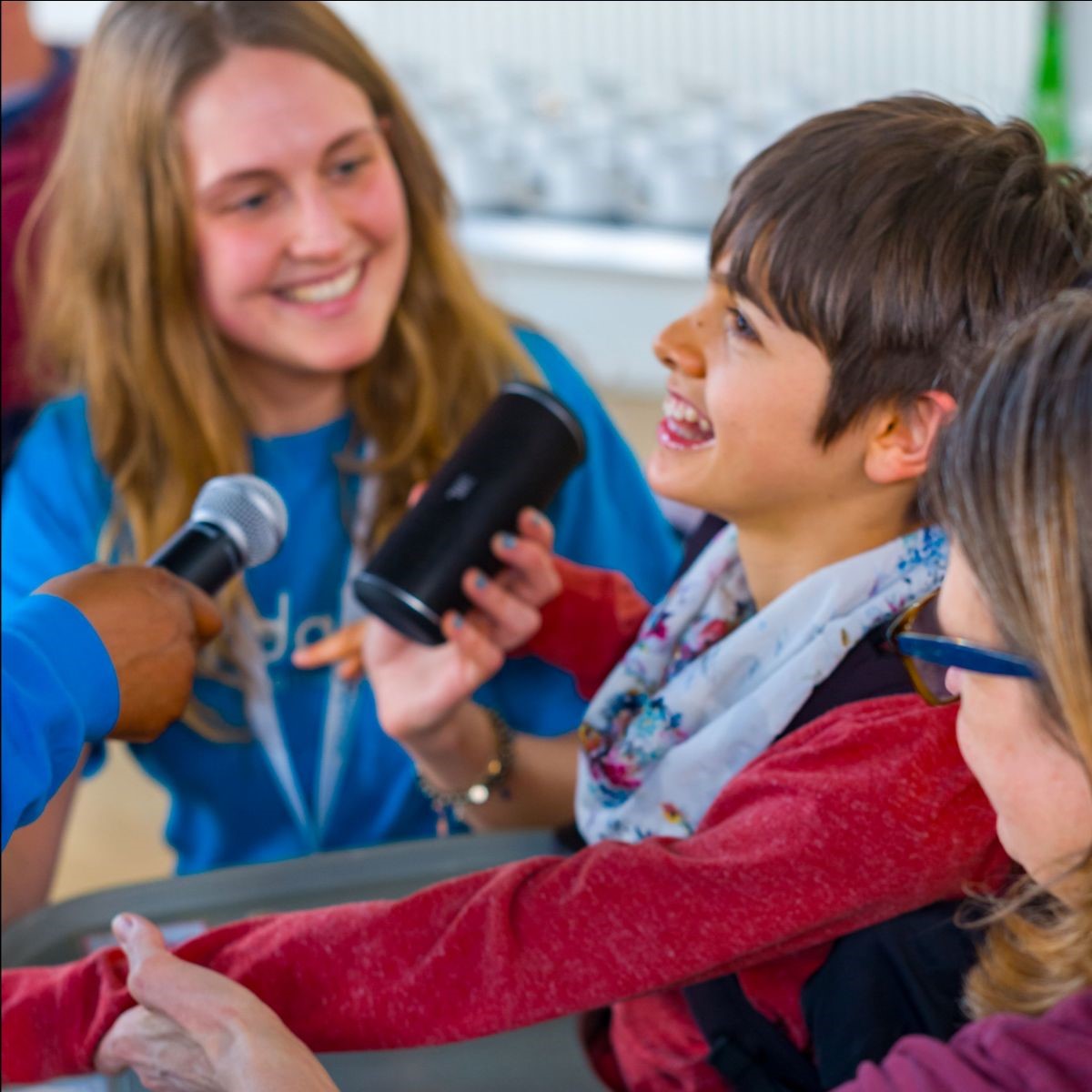 The choir has been an enormous success bringing together people with learning difficulties, their families, members of a local choir and singers of all ages and abilities who would like to join.

“Necessity is the mother of invention” and this Covid 19 crisis has inspired them to develop virtual Soundabout sessions for the first time- Soundabout Live! interactive music-making sessions for people of all ages with severe and profound learning disabilities has started. The first session on Soundabout’s Facebook page Soundabout was on Saturday 21st March, led by experienced music practitioner, Steve Harper.

Oxford Philharmonic, FUNomusica Family Concert
Oxford Philharmonic applied to TASO for a grant to cover the fee of the conductor/presenter of a FUNomusica Family Concert in Oxford Town Hall in June 2019. Children and their families from Oxford and surrounding areas were invited to experience orchestral classical music in the relaxed and educational atmosphere that is FUNomusica. More than half of the audience of 250 children and members of the local community with special needs, received free tickets. The programme is aimed at 4-8 year olds, but the concerts are open and welcoming to people of all ages. 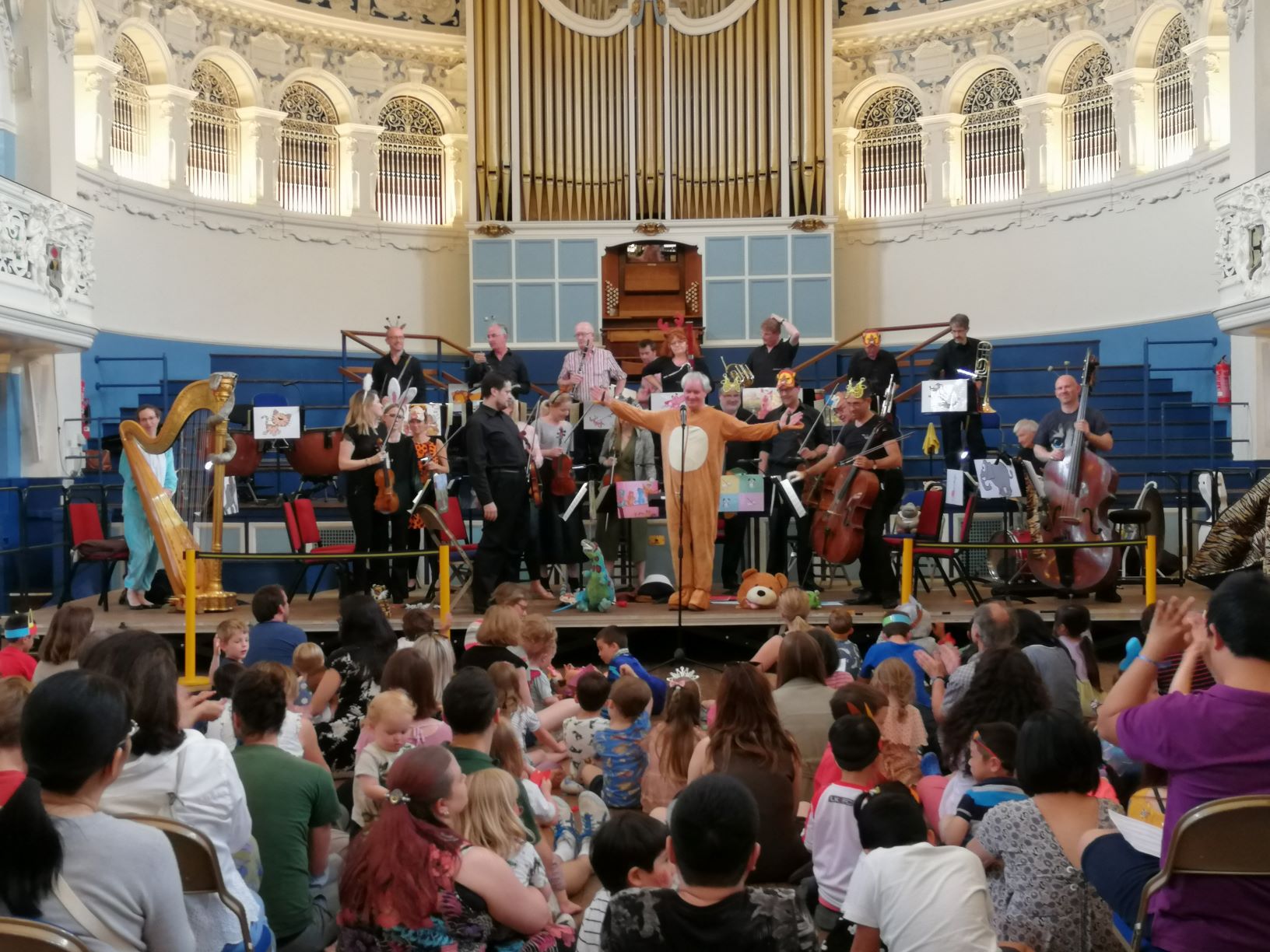 TASO was pleased to support exposing and involving children and people with special needs to classical music. Not only does the music improve their social development and enhance creativity but it boosts self-esteem, develops language and reasoning skills, builds curiosity and contributes to all-around better growing experience. The Concert was a huge success.

“The concert was hugely enjoyed by our whole family especially the How to Train your Dragon theme music. My little daughter has autism and been obsessed by dragons most of her life, so it made her day.”

“It was brilliant!! Kids really got involved in the music and were still talking about it at bedtime. Thank you for making this possible for us.”

Restore Mental Health Charity Photography Project
A grant given for a photography project. Participants with the help of a tutor photographed portraits and views of Oxford, the results of which were shown at an exhibition on 22nd October. There are cards on sale in the Restore café which is well worth a visit.  The photographs were all of a very high standard and most participants were at the exhibition.

The Cake Cutting Ceremony by Helen White (Photography Tutor) and Lesley Dewhurst (Chief Executive of Restore) The cake in the shape of a camera was made by one of the participants.

Link to a short video interview about the project by Charlotte Watmough. (Head of Regional Services) 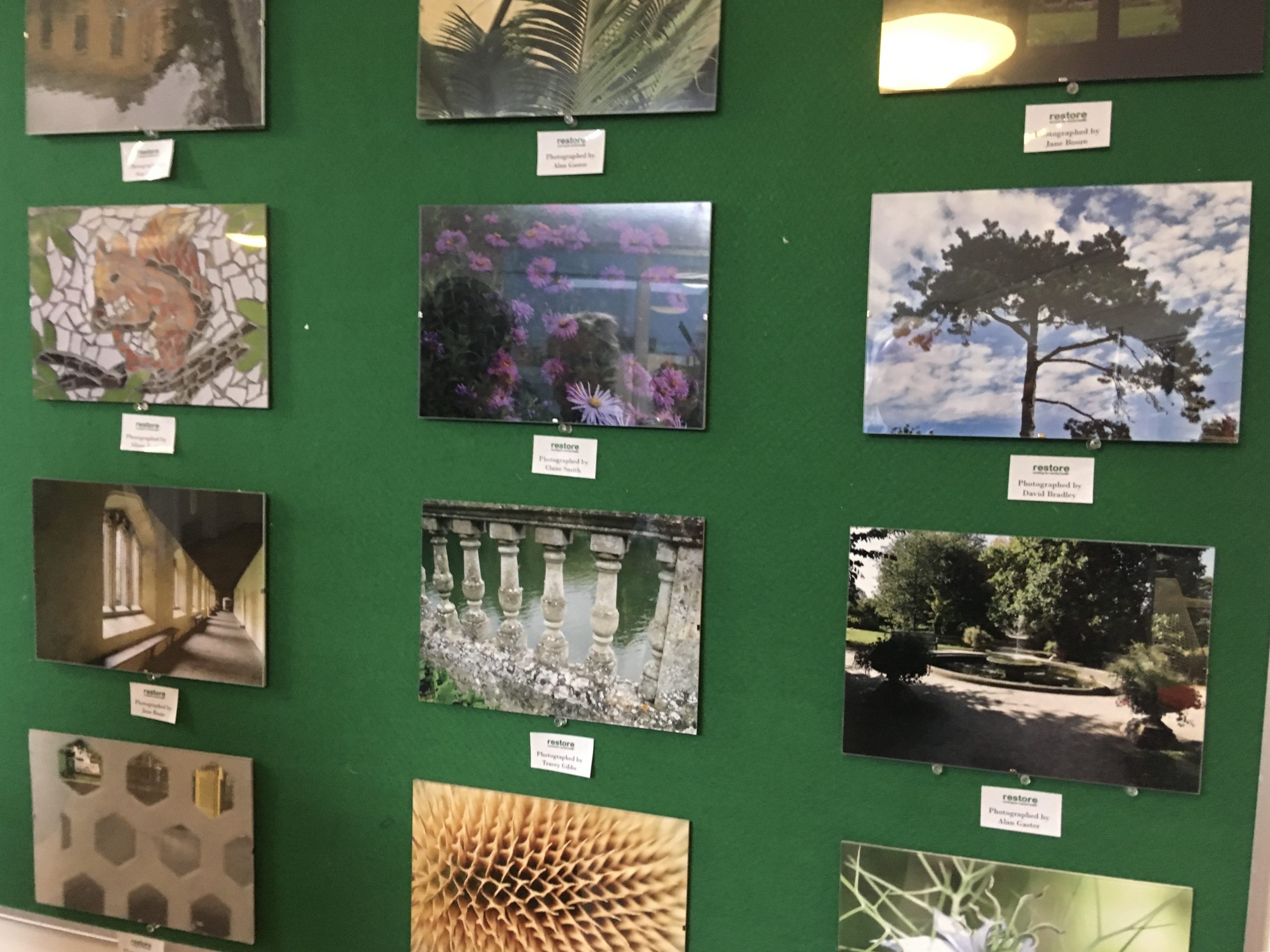 Digital Portraits Ashmolean Museum and Rose Hill Primary School
Four workshops over a number of months working with 46 children. The children visited the galleries to draw inspiration from portraits in the collection for 2D portraiture. The Ashmolean supplied a range of props and costume for the children to use if they wished and then took photos which they imported into an iPad app called Sketches.

Comments from the participants: 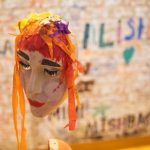 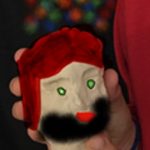 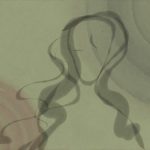 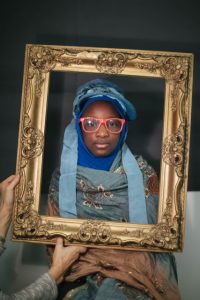 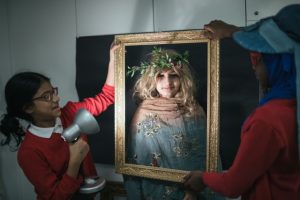 Old Fire Station – ‘Our Place’ second year
This is the first project TASO has funded over a two year period, as well as being match funded.

The Old Fire Station works with a range of arts particularly aimed at the homeless. The ‘Our Place’ project engaged about 35 homeless people, 5 professional artists and more than 2000 people including visitors to the final exhibition. It has helped AOFS and Crisis develop a model for social inclusion by engaging the wider public in workshops and the final exhibition. The project increased the skills of the artists working with the homeless and enabled those with severe disadvantages to develop personal skills.

As well as directly benefiting those involved, ‘Art at the Old Fire Station’ workers feel the experience of managing a 2 year project has been invaluable in developing their longer term approach working with disadvantaged individuals.

On a number of occasions TASO has had very favourable comments for the support we have given.

Below are images of the art hanging in the final exhibition. Pitt Rivers – Youth Action
TASO sponsored the Pitt youth action team which is an ongoing project involving 16-19 year olds as part of possible career development. They are engaged through meetings with the activities of the Museum and have the opportunity to curate their own showcase.

The funding for this project was to act as a bridge until it became self-funding in future years.

Ark T – ‘The ROARsome Collective’
TASO funded two artists to create costumes with help from eight disabled artists aged 11 to 40 over four weeks. The participants then performed in the costumes at the Oxford City of Light Festival in November 2018. It was a very successful collaboration and delighted the young people to join the Festival.

Unfortunately we have no pictures of this, it went very well.

HMP Bullingdon – Painting Workshops
TASO helped to finance a project to support an artist to run painting workshops for up to 12 young adults in HMP Bullingdon. They produced paintings for an exhibition at the prison with a subsequent exhibition taking place in Didcot. The Old Fire Station – ‘Our Place’ project
This is the first project TASO has funded over a two year period, as well as being match funded.

The Old Fire Station works with a range of arts particularly aimed at the homeless. The ‘Our Place’ project engaged about 35 homeless people, 5 professional artists and more than 2000 people including visitors to the final exhibition. It has helped AOFS and Crisis develop a model for social inclusion by engaging the wider public in workshops and the final exhibition. The project increased the skills of the artists working with the homeless and enabled those with severe disadvantages to develop personal skills.

As well as directly benefitting those involved, ‘Art at the Old Fire Station’ workers feel the experience of managing a 2 year project has been invaluable in developing their longer term approach working with disadvantaged individuals.

On a number of occasions TASO has had very favourable comments for the support we have given. As part of a European project St Ebbe’s School was twinned with a school in Romania whose pupils also produced cards which were eventually exchanged between the two schools. The project supported siblings of children with life limiting conditions. An artist led a weekend workshop for the siblings to produce mosaics reflecting on the feelings they had towards their sister/ brother’s condition and living in Helen House.

The mosaics produced during the project are powerfully expressive.

We keep a photographic record of each project for our website and publicity purposes, taking care to ensure that we abide by regulations and host requirements concerning distribution of photographs of young and/or vulnerable people. Below are photos with more details of some of the projects